Commentary: A Conversation with HRH Princess Sarah Zeid of Jordan on Mothers and Children in Humanitarian Crises 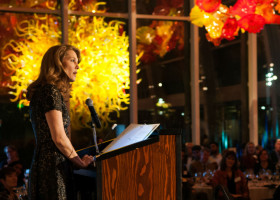 The birth of a child should be a day of celebration and awe. But for millions of women around the world it can be the most dangerous ­– and too often the last – day of her life. Save the Children, with its release this week of the 2014 report on the State of the World’s Mothers, reminds us of how far we have come in keeping mothers and their babies healthy and safe, but also how much more we need to do. A special focus of this year’s State of the World’s Mothers report is the dire situation faced by expectant mothers who are caught in humanitarian crises.  In fact more than half of all maternal and child deaths worldwide occur in crisis-affected places.

In anticipation of Mother’s Day this weekend, I reached out to maternal and newborn health advocate Princess Sarah Zeid, to discuss how we can focus our efforts to save the 800 women who die every day during pregnancy or childbirth, and to explain her reasons for getting involved in this important effort.

You had a near death experience delivering your third baby, a girl, here in the United States. Can you tell us a little bit about that experience and how it changed you and inspired you to become an advocate for the estimated 289,000 women who do not survive childbirth each year?

My life-threatening experience occurred four years ago, at the birth of my third child. Immediately after delivery I suffered an amniotic fluid embolism, which is a rare obstetric emergency. There was very little chance that I would survive the experience, but under the exceptional care available to me, my life was saved. The reality that my three children came so close to being motherless literally catapulted me to becoming an advocate for maternal health. Mothers are the heart of every family, and crucial to the survival, well-being and happiness of newborns and children.

Just imagine: If the low-cost medicines oxytocin and misoprostol were available to all women giving birth, we could prevent 41 million cases of postpartum hemorrhage — the leading cause of maternal mortality-and save the lives of 1.4 million women over 10 years.  That represents 1.4 million more women who could continue to be the glue for their families and communities; to safeguard their children’s health, education, and security; and to inspire their offspring to seek bold and successful futures.

In addition to the women who die in childbirth, so many babies still do not survive the first month of life – 2.8 million each year – with most of those deaths occurring on the day of birth and the days immediately following.  A further 2.6 million babies are stillborn every year. What are some of the ways we can prevent maternal and newborn deaths and stillbirths in this critical 48 hours around birth?

The world has come to recognize that newborn survival must be addressed, and in June this year we will see the launch of Every Newborn: An Action Plan To End Preventable Deaths.  The plan is part of the UN Secretary General’s maternal and child survival movement – Every Woman, Every Child.  This Plan sets the first-ever target to reduce not just newborn deaths, but stillbirths – and that new goal is 10 deaths per 1,000 live births by 2035 for both stillbirths and newborn deaths.  Newborn survival and health are intrinsically linked with the survival, health and nutrition of women before conception and during and between pregnancies. The periods of greatest risk for mortality for woman and child – and the focus of the Every Newborn action plan – are when the woman is in labor, giving birth and during the first days of life. Intervention during this critical time period provides the greatest potential for ending preventable neonatal deaths.

Introducing high-quality care with high-impact, cost-effective interventions for mother and baby together – delivered, in most cases, by the same health providers with midwifery skills at the same time – is the key to improving the quality of care.

Save the Children just launched its State of the World’s Mothers 2014 report, with a special focus on saving mothers and children in humanitarian crises.  We won’t meet Millennium Development Goal 5 and our maternal health goals by 2015 unless we can deliver health services to the most vulnerable women and children in crises. How can we ensure that humanitarian interventions prioritize maternal health?

Save the Children’s excellent and crucial report draws attention to the extraordinarily difficult situation faced by mothers and children in crisis settings.  Of the 80 million people projected to need humanitarian aid in 2014, more than three-quarters are women and children. The report shows that in the most challenging places to be a mother, 1 in 27 is likely to die from a pregnancy-related cause, and 1 in 7 children die before their 5th birthday. These are shocking figures and an absolute tragedy, especially because the majority of these deaths are preventable.

We must ensure that mothers their newborns and children living in crisis situations are put at the center of national and international processes when we provide humanitarian support in these challenging situations.

Despite more women delivering their babies in facilities that have skilled birth attendants, in many places we are not seeing the expected decline in maternal and newborn deaths, so something is not right with the quality of care being provided in facilities.  As the world gets closer to the 2015 end of the Millennium Development Goals, how can we get real improvements in the quality of care at the large maternity facilities in the countries where most maternal and newborn deaths are concentrated?

Many countries are now encouraging women to deliver their babies in facilities and not at home, where there is no access to skilled care. This is the right policy.  But to really reduce maternal and child deaths, policy makers must focus on what happens when women get to the facilities.  We know that too many of the facilities are not able to provide quality care. They don’t have the right equipment, they don’t have the trained staff, and too often they just don’t create a supportive environment for women – a respectful environment so that pregnant women and new mothers are treated with dignity and compassion.  Not surprisingly, women don’t want to deliver their babies in facilities that can’t offer a quality experience. Partners like the World Bank and Merck for Mothers, I know, are committed supporting countries with this critical quality issue.

The strong relationship between contraceptive use and maternal and newborn survival is not well known. I was surprised to learn that if all of the women who wanted to use modern contraception did, we would have 600,000 fewer newborn deaths each year and 80,000 fewer maternal deaths. Can you talk about the role of contraception in maternal and newborn health and survival, particularly for adolescent girls who are most at risk of death in childbirth and whose babies are at higher risk for newborn complications?

Contraceptive use is inextricably linked to maternal and newborn survival, as it decreases the risk of both maternal and newborn deaths among women most at risk – adolescent girls, women who have had a very recent pregnancy, older women who have already had many pregnancies – and it also reduces the need for unsafe abortions, which are now the third leading cause of maternal deaths. The United Nations Population Fund (UNFPA) – the lead UN agency for delivering a world where every pregnancy is wanted, every birth is safe, and every young person’s potential is fulfilled – estimates that one in three deaths related to pregnancy and childbirth could be avoided if all women had access to contraception. The fact that more than 200 million women in the world today want to use modern contraception and can’t get it is one of the most shameful statistics in global health.  We all know the strong relationship between contraceptive use and women’s empowerment and economic and social development, so reducing the unmet need for modern contraception must go right to the top of our global development priorities. We can’t afford not to confront this issue, as many countries are still struggling with fertility rates above 5 children per woman, and this massive population growth is making to harder for women, for families, for communities and for entire nations to achieve their full potential.

Finally, I know that the Syrian conflict is one that is of particular concern to you.  How is this grave crisis specifically impacting the health of mothers and children?

The current situation in Syria is both horrific and heartbreaking. Every day this brutal civil war continues, the resilience of Syria’s women and children is further eroded, as they are weakened by malnutrition, disease, untreated aliments and injuries.  Today, as a result of the conflict, the public health system has broken down and almost half of the Syrian population is on the move. Children under the age of five are at greater risk of dying from treatable and vaccine-preventable illness such as diarrhea, respiratory illness, measles and meningitis. Polio, once eradicated in Syria, has re-emerged and is putting the lives of children, both in Syria and in the region, at risk.  Already, UNFPA estimates that there are over 2.8 million Syrian women and girls of reproductive age in need of support inside and outside the country. That number is expected to grow to 5 million in the next eight months. This means thousands of women bearing and delivering babies under the most perilous circumstances.

For families, dwindling resources keep women, babies and children away from seeking medical care often until problems have become critical. As in many middle-income countries, Syrian women had moved away from the practice of exclusive breastfeeding, a trend that has continued throughout the conflict. Newborns are therefore not getting the critical protection and nutrients provided by breast milk, but the lack of availability of formula, or the expense of it, means that mothers are using water and sugar to feed their small ones.  Newborn babies are surely the most innocent and helpless victims of war. In Syria, less than half of the remaining functioning public hospitals have the equipment and staff to treat newborns. Prenatal, delivery and postnatal care, which are vital for a healthy mother and baby, are often impossible to access because of checkpoints and roadblocks, lack of security, lack of ambulances and lack trained health workers. We urgently need to increase the number of skilled and female health workers in crisis situations through improved access to training.    We must ensure that every mother and newborn living in crises has access to high quality health care – a goal expressed in the forthcoming Every Newborn Action Plan, which I urge governments to support and adopt at the World Health Assembly.