Faith communities have tremendous potential to improve health throughout the world. Achieving the MDGs will require us to take better advantage of the ground game faith that communities make possible. 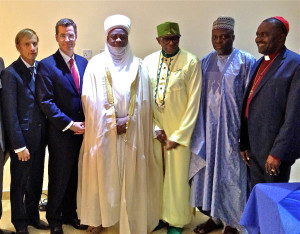 Our partners in the international development community often mention the positive role that religious leaders and networks can play in support of health outcomes. Yet efforts to achieve the Millennium Development Goals (MDGs) have failed to systematically engage religious networks to full advantage. The faith community offers an asset that is inestimable in its potential for driving change: we have a deeply rooted and highly trusted ground game that reaches every village, no matter how small or remote. Faith communities hold a number of key tools to help accelerate the pace of maternal and child survival; we have centuries of practice at “behavior change” and from our leadership to our rural pastors and imams; and we’re ready to make a difference for the health of our people!

Our story in Nigeria illustrates the positive role that faith networks can play. In 2009, various donors had put together nearly $2 billion for malaria control in Nigeria. The plan included significant resources for nets, but needed more manpower to deliver essential behavior change messaging. The Ministry of Health and Ray Chambers, UN Special Envoy for Financing the Health MDGs and for Malaria, had the foresight to approach the faith community in Nigeria about helping. We established the Nigerian Interfaith Action Association (NIFAA) as an NGO with leadership from the Sultan of Sokoto, who is the spiritual leader of Muslims in Nigeria, and the President of the Christian Association of Nigeria representing all Christian denominations. An essential piece of the malaria coalition was now in place.

By working with NIFAA, the Nigerian government was able to engage with all religious groups through one organization. Using seed funding from the GHR Foundation and malaria funding from the World Bank, we had huge success in fighting malaria by training over 20,000 faith leaders in the first 18 months of operation. An independent evaluation of NIFAA’s World Bank-funded work showed more than twice as many children under five slept under a net (51.6 percent) in locations where NIFAA leaders had been trained as compared to nearby and demographically similar areas where only 25.1 percent had slept under a net. I know of other faith networks throughout Africa, such as those supported by Episcopal Relief and Development’s NetsforLife, that have conducted independent evaluations demonstrating similar impact and improved health outcomes.

Now that the Nigerian government has launched its “Saving One Million Lives” initiative, it would be irresponsible not to utilize NIFAA, a tremendous asset that has been created with donor funding and where NIFAA infrastructure exists in every state. Our communities of faith are eager and stand ready to support maternal and child health goals. In May 2014, NIFAA convened the Faith Summit for Child Health with participation from the Honorable President represented by Health Minister Chukwu, Global Fund Executive Director Dr. Mark Dybul and other key donors to develop a plan on how to best mobilize and invigorate the faith communities. The overwhelming consensus from the meeting was that the Government should continue to engage NIFAA in its malaria response, as well as on other leading causes of maternal and child deaths, with a specific focus on messaging around use of ORS and zinc in diarrhea treatment.

My brothers and sisters of faith in other countries facing similar health challenges as Nigeria share the same calling of NIFAA members to support their congregants, not only spiritually but also in other areas of life that present a challenge, including in health. As the African continent faces an Ebola epidemic, we know that poor information and rumors are hindrances to stopping this horrible disease. Faith leaders have the trust of the community. We can work hand in glove with public health officials to ensure that communities have accurate information about stopping transmission, that individuals seek treatment when ill, and that health officials bury the dead safely. Faith leaders also can fill a critical need in spiritual healing as we battle Ebola and, once we have conquered it, in providing hope to families who have lost loved ones.

While faith engagement can be cost-effective, it is not free. Donors need to invest in building the capacity of indigenous interfaith networks to support MDG efforts, particularly in behavior change messaging. This investment will support the MDGs, and also contribute to peace and security as Muslims and Christians work together toward a common goal and improve health and opportunity in communities throughout Africa. It will build the capacity of religious networks that have been part of these communities for centuries and will continue to serve the needs of our people for centuries to come.