Commentary: Newborn Deaths – The Final Frontier in the Battle for Child Survival 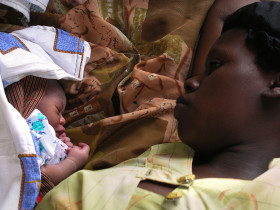 We should all know the story by now. The world has made remarkable progress in transforming child survival. In 1990, we lived in a world where 12 million children did not reach their fifth birthdays. Now, we live in a world where half as many children suffer an early death. What is less well known is that not all children have benefited equally from this remarkable progress. Older children have enjoyed the greatest gains partly because the most powerful interventions — vaccines, treatments for pneumonia, diarrhea and malaria, nutritional supplements and bed nets — target the leading causes of death for older children. When it comes to the leading causes of newborn death — prematurity, birth asphyxia and infection — simple, affordable tools to prevent and treat are often not available at all, or not available in the right formulations for newborns.

This is one of the major reasons that 2.8 million babies die in the first month of life, the vast majority on the day of birth and in the week after.  Newborn deaths today account for 44 percent of all child deaths, and the percentage is rising. This is why newborn deaths represent the final frontier in child survival, and without a concerted effort to reduce these deaths Millennium Development Goal 4 will be difficult to achieve and the new global goal of ending preventable child deaths in a generation will not be met.

Recognizing that newborn survival holds the key to child health goals, the global health community is rallying behind the first-ever global plan to reduce newborn deaths. The Every Newborn Action Plan, which will be presented to the World Health Assembly in May, sets a new target of 10 newborn deaths per 1,000 lives births (the current global average is 21) and offers governments and other stakeholders a roadmap for how to get there. Critically, the Plan includes stillbirth, which was excluded from the Millennium Development Goals, and sets the first global target of 10 stillbirths per 1,000 live births. As there are almost as many estimated stillbirths (2.6 million) as newborn deaths, the Plan embraces a massive population of infant deaths and family suffering and confronts one of the biggest challenges that health systems across South Asia and sub-Saharan Africa are facing.

The Every Newborn Action Plan requires all stakeholders — governments, UN agencies, civil society and the private sector — to collaborate on five strategic objectives: (1) investing in care during labor, birth and the first week of life; (2) improving the quality of maternal and newborn care; (3) reducing inequities, (4) harnessing the power of parents, families and communities; and (5) counting, measuring and tracking births, deaths, program quality and performance. These objectives are grounded firmly in the evidence of what works to reduce maternal and newborn deaths, based on the 2005 Lancet series on newborn survival and the strong body of evidence that has emerged since.

There is now general agreement that because more than 7 in 10 maternal and newborn deaths and 1 in 3 stillbirths occur during the first week after birth, the priority must be to increase access to the interventions that can directly prevent these deaths during this critical time period. This includes interventions that can prevent and treat hemorrhage, hypertension, obstructed labor, prematurity, low birth weight, infection, and babies who are not breathing. Delivery environments must be clean to reduce the risk of infection and babies should be breastfed within an hour of birth. The suite of medicines and devices that are critical during this period include oxytocin, misoprostol, magnesium sulphate, antenatal corticosteroids, antibiotics, chlorhexidine and all the technology that is needed to provide emergency obstetric care and the resuscitation and care of sick newborns.

But the Plan also acknowledges that action is needed to reduce the risk of maternal and newborn death in the months preceding birth.  Pregnant women should be routinely screened for syphilis, AIDS and diabetes, particularly in those countries with high rates of these diseases, and treated if the tests are positive. All pregnant women in malaria-endemic countries should be sleeping under insecticide-treated bed nets and receive malaria medicines during pregnancy. The Plan also makes a powerful case for two interventions that create an enabling environment for sustainable reductions in maternal and newborn deaths: maternal nutrition and modern contraceptive use. Poor maternal nutrition is a factor in an estimated 28 percent of newborn deaths due to low birth weight, and modern contraceptive use has the potential to prevent an additional 600,000 newborn deaths by reducing the number of “at risk” pregnancies due to the age of the mother and/or pregnancies that are spaced too closely together.

Investments in both the quality of care around the time of birth and in the months preceding are especially important in the 25 countries where 80 percent of newborn and maternal deaths are concentrated (Table 1, below), as this is what will ultimately deliver the reductions in newborn deaths that the Plan requires. Identifying the facilities, public and private, where large numbers of the most vulnerable women are delivering their babies and investing heavily in improving the quality of care provided will maximize impact. In those countries where the vast majority of women still deliver at home, progress in the short-term will depend on how quickly skilled care can be brought into or very near the home.

As many of the countries with the greatest burdens of maternal and newborn deaths also have extremely high numbers of teenage mothers and high fertility rates, increases in modern contraceptive use and improvements in female literacy and the nutritional status of girls and women can translate into sustainable declines in maternal and newborn deaths. Where declining fertility rates and rising female empowerment are accompanied by economic growth and rising incomes, the entire effect can be accelerated.

This is how countries like Malawi, Nepal and Bangladesh have achieved relatively high rates of reductions in newborn deaths (3.5 to 4 percent per year since 2000) and achieved Millennium Development Goal 4. Malawi significantly increased facility births with skilled attendants and targeted the leading cause of newborn death — prematurity — by pioneering the expansion of Kangaroo Mother Care. Large increases in the proportion of pregnant women treated for malaria, in tetanus toxoid vaccination and in rates of exclusive breastfeeding in the first month of life also helped.

Taking a different approach, Nepal, with its high rate of home births, focused on community interventions that helped drive down newborn mortality.  Bangladesh followed a similar path with even stronger results: dramatically increasing access to facility delivery, skilled birth attendance and caesarean sections, and more than doubling initiation of breastfeeding within one hour of birth. Visible across Malawi, Nepal, and Bangladesh was a sustained focus on newborn survival at the political leadership levels and within the ministries responsible for health. In all three countries, non-government organizations played a vital role in policy development and leadership and in implementing the flagship newborn programs.

With fewer than 675 days remaining to the MDG deadline and more than a million newborn lives at stake,  it is vital that resources flow now to the interventions and the countries where the most deaths can be prevented. This means all stakeholders must be mobilized to invest in the quality of care during the critical 5 days after birth, targeting the communities where the largest populations of the most vulnerable women are delivering their babies in the 25 countries listed below. Investors with an eye to sustainable gains should be focused on the same set of countries and working to improve the education and nutritional status of the most vulnerable girls and women and increasing their access to modern contraceptives plus early identification of risk factors during pregnancy including malaria, syphilis, diabetes, AIDS and infection. The Every Newborn Action Plan is the right platform for action. All stakeholders — public and private — who can help the world move closer to ending preventable maternal and child deaths should step up and join the movement by signaling their support and making a commitment when the Plan is launched in June 2014.

Table 1: 8 in every 10 maternal and newborn deaths occur in just 25 countries…