Dr. Mark Grabowsky explores the potential impact of climate change on human health, and the heavy burden that will be carried by communities already at greater health risk. This piece originally appeared in Climate 2020: Facing the Future, a publication of the United Nations Association-UK. 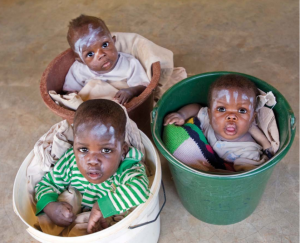 Climate change is not good for the planet. It’s not good for the human race. And it’s especially not good for the world’s most vulnerable people, who will bear the heaviest burden of Earth’s rising temperature. Let’s start with climate change and human survival. It turns out that there is an optimal temperature for human survival called the minimum mortality temperature. Departures from this optimal temperature in either direction are associated with increases in mortality. That optimum temperature is around 18°C (64°F), similar to what could be found on a typical spring or autumn day in New York City. In Britain, annual mortality increases by about two per cent for each degree of average increase or decrease. In France, when the average temperatures rises to 25°C, the mortality rate increases by 15 per cent.

There is an additional mortality effect of consecutive high-temperature days during a heatwave. The effect is not limited to those in poor health, such as the elderly. It also results in higher mortality among the healthy, including newborn infants.

There are different optimal temperatures for other organisms. The optimal growing temperature for the organisms responsible for most infectious disease deaths – mosquitoes, cholera, E.coli and pneumococcus – is around 28°C to 30°C.

Well-developed nations have been able to adapt to the Earth’s temperature changes because they have a reservoir of resilience: excess agricultural production, robust hospital capacity and a social safety net. And like the simple act of moving from the sun into the shade, wealthier societies have adapted to the changing climate by effectively shading themselves – with air conditioning at home, work and shopping malls. Research from France shows that over time the mortality from excess warming has decreased as we adapt.

But as climate events become more severe, we may be reaching the limits of our ability to adapt. Previously rare heat events are becoming more common and are affecting wider geographic areas. The 2003 European heatwave – the most severe in recorded European history – resulted in 70,000 excess deaths.

There is a high degree of certainty that human activity caused or exacerbated that heatwave. Subsequent heatwaves in 2006 and 2010 have set additional record high temperatures. These heatwaves resulted in lowered agricultural outputs and direct economic losses through lowered production, employment and consumption.

The same events will cause relatively larger impacts in less resilient populations. When Hurricane Sandy hit New York in October 2012, 53 New Yorkers died, mostly through drowning. There were very few post-Sandy deaths. Coincidentally, only 54 people in Haiti were reported to have died during Sandy. However, because Haiti had an ongoing cholera outbreak and an ineffective public health system, the storm flooding intensified the outbreak, resulting in large numbers of post-hurricane cholera cases.

Climate change will have its greatest impact on those areas with the least resilience and the highest background mortality rates. We know where these areas are. Child and maternal mortality is increasingly focused in hot spots of civil unrest and poor health services.

Of the 14 countries that are furthest from achieving Millennium Development Goal 4 (child survival), 11 are classified as fragile states. Overall, about one-third of global child mortality occurs in these limited geographic areas even though they make up about only about one tenth of the world’s population. Children in these environments have a four times higher risk of death than children in non-fragile settings. The governments and routine health service delivery in fragile states are too weak to provide the full package of prevention and treatment services for the leading threats to survival: newborn causes, pneumonia, malaria, diarrhoea and under-nutrition.

This highlights the importance of the proposed Sustainable Development Goal that focuses on mitigating and adapting to climate change. The target is to “strengthen resilience and adaptive capacity to climate-induced hazards and natural disasters in all countries.” In order to truly mitigate these impacts, we need to address the effects of climate change on the world’s highest-risk populations.

While health is but one of the negative effects of climate change, we are fortunate that many of our current health tools are highly effective regardless of the environmental temperature. Vaccinations, family planning, antibiotics and bednets remain effective and essential, and their importance in a world of increasing temperature and climate impact is that much greater.

A child who is vaccinated against diarrhoea and pneumonia will continue to be protected regardless of a change in temperature. A woman or girl with access to family planning is protected against the greatest threat to her health – an unwanted pregnancy – regardless of the change in annual rainfall. A family that has a bednet and access to malaria treatment is far less likely to suffer from malaria even with the increase in mosquitoes.

As we commit ourselves to addressing climate change, we also need to commit to addressing its impacts, which will fall most heavily among those who are already suffering the most. Reducing these people’s vulnerability now is an essential step in preparing to address climate-related health problems later.