MDG Health Alliance’s Leith Greenslade, with FHI360’s Patrick Fine, on why integrated approaches are key to reducing mortality rates among mothers and infants. This article originally appeared in Devex. 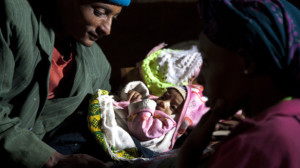 There is no question that the greatest health achievements under the Millennium Development Goals have focused on single diseases. Arresting the spread of HIV and AIDS and malaria is perhaps the most significant development success of the new century. And vaccination, especially of measles, is one of the reasons that deaths among older children have fallen faster than deaths among infants or women during pregnancy and childbirth.

Could these targets have actually been achieved if we had pursued an integrated approach to advancing the health of women and children? Did our fascination with and confidence in the segregation of single-disease initiatives cost us achievement in other areas requiring more complex solutions?

These questions are not academic; we are now at a moment where the MDGs are being reformulated, and a new set of even more ambitious global development goals will be unveiled this September. At this time, it is critical that we take account of the emerging evidence that segregation, which has been so successful in some areas of global health, is holding back gains in others.

A recently released study from researchers at Stanford University concluded that segregated programs create unintended consequences and negative externalities, which can lead to misallocation of resources — both funds and talent — especially in countries where recipient autonomy is low and the magnitude of aid is high.

These findings might also explain why, in a recent report by the Institute for Health Metrics and Evaluation, the countries that performed so well in reducing measles deaths among children performed so poorly in reducing deaths from the leading infectious killer of small children: pneumonia. Afghanistan, the Democratic Republic of the Congo, Niger, Nigeria and Pakistan have reduced measles deaths by more than 80 percent since 2000, while pneumonia deaths fell by less than 20 percent and actually rose in Congo and Kenya over the same period.

Segregated approaches are attractive to donors and international organizations in part because the transaction costs — in terms of program design, negotiation and delivery — are lower and the results easier to measure. But ultimately, it is people in low-income countries who pay the price for health systems that do not meet their full needs. And it is women who are on the front line because they tend to be the primary caregivers, care seekers and custodians of family health.

It is no surprise that women, and the children in their care, benefit most when pneumonia and malaria diagnosis and treatment are integrated; when major lifesaving vaccines, food supplements and clean water can be had at the same time; when malaria bed nets and diarrhea treatments are bundled and dropped door-to-door; and when contraception and testing for HIV, malaria and sexually transmitted infections are all part of the same prenatal care services. It is women who save precious time and money seeking care and children who reap the full rewards of better health. And, because the families facing the greatest health risks benefit disproportionately from integrated service delivery, integration can be a tool to reduce health inequalities — a growing problem in almost all countries and a major barrier to the “grand convergence” outlined in Global Health 2035.

By aligning the global health architecture with the needs of the most vulnerable individuals, the pace of global health progress will accelerate. A lives-saved analysis undertaken by the MDG Health Alliance showed that an additional 300,000 child deaths could be prevented simply by bundling five interventions — vaccines, diarrhea and pneumonia treatment, nutrition supplements and breastfeeding promotion — and delivering them to nine subpopulations of highly vulnerable children in countries of South Asia and sub-Saharan Africa. We believe lives saved would be even higher by including income, education and infrastructure components, as evidence shows clearly that much of the reduction in child deaths since 1990 is due to factors outside the health system. When this broader integrated approach was tried in Mali by Project Muso, child deaths fell tenfold over a three-year period.

Despite the evidence and rising drumbeat for more integration, the majority of global health financing, policies and programs remains largely segregated, with goals of eradicating specific diseases or achieving coverage of specific interventions rather than achieving broader health gains for targeted populations. This approach will not be enough to end preventable maternal and child deaths in the 15 years allotted by the new global development goals and might actively hold back that achievement.

It’s time for a serious conversation about the costs of segregation.