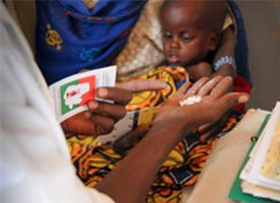 New York: The World Health Organization’s World Malaria Report 2012, released today, notes a continuation of progress in 2012, but also sounds the alarm on a looming financial crisis that threatens to stall or even wipe out recent gains against the disease. The current scale-up in the fight against malaria has saved more than one million lives over the past decade.

Reacting to the WHO report, Ray Chambers, the UN Secretary-General’s Special Envoy for Malaria and MDG Advocate, said: “If we fail to come together and urgently resolve the funding shortfall, there will be no averting a humanitarian crisis. Millions of children can be saved in the coming years with methods that have already proven their success, yet we will lose this chance if funds are not mobilized immediately. We cannot allow so much progress to get stuck or even come undone, and I call on all of our partners to mount an unprecedented Big Push over the next 36 months to achieve the Secretary- General’s vision of a world where no child dies from malaria.”
As documented in the WHO report, funding is urgently needed to replace insecticide-treated bed nets, which have a three year lifespan, and to expand treatment and diagnostic testing. If nets are not replaced, individuals previously protected from malaria become vulnerable, leading to potential epidemics. Children are most at risk.
“There is a great irony here with the financial shortfall,” said Professor Jeffrey D. Sachs, Special Advisor to UN Secretary General Ban Ki-moon. “Ten years ago, the world said, ‘Show us that malaria can be controlled.’ This has now been accomplished. The progress is unprecedented. Now is the time to finish the work, not to let up. With enough community health workers, malaria deaths can fall to near zero by 2015.”
Approximately US$3.6 billion in additional funding is required in sub-Saharan Africa between now and 2015. In order to stave off backsliding and resurgences as early as 2013 and 2014, US$2.4 billion is urgently required, of which US$1 billion is required in Nigeria alone. This funding shortfall is occurring just three years before Secretary-General Ban Ki-moon’s deadline for reaching near zero malaria deaths at the end of 2015.
“We cannot achieve further progress unless we ensure that sustained and predictable financing is available,” said WHO Executive Director Dr. Margaret Chan. “We must act with urgency and determination to keep this tremendous progress from slipping out of our grasp.”
The report documents significant progress over the past two years, with deliveries of Rapid Diagnostic Tests (RDTs) increasing from 88 million in 2010 to 155 million in 2011, and WHO-approved drugs for treating malaria increasing from 158 million in the public sector in 2009 to 278 million in all sectors in 2011. Access to Long Lasting Insecticidal Nets (LLINs) remained constant with nearly 300 million usable nets having been delivered since 2010.
Since 2007, funders, led by The Global Fund to Fight AIDS, TB and Malaria (accounting for over half of all external malaria funding), The United States President’s Malaria Initiative, the United Kingdom, and the World Bank, UNITAID, and other partners have invested over $10 billion in reversing the course of the disease, protecting hundreds of millions of children, women and men with lifesaving commodities, primarily in sub-Saharan Africa, where over 90% of malaria deaths occur.
The replenishment and recapitalization of the Global Fund, which has emerged from a year of crucial reforms, in September of 2013 will be a decisive factor in determining if the progress is able to be maintained, as will additional funding from other primary funders, including the World Bank’s International Development Association, or IDA, which is also seeking a replenishment next year, and continued support from the United States and United Kingdom.
“The progress we have collectively made against malaria in recent years is one of the world’s greatest development turnarounds,” said Gabriel Jaramillo, General Manager of the Global Fund to Fight AIDS, TB and Malaria. “The Global Fund has been proud to help fund the progress to date, and we are committed to ensuring that that we do not reverse course. A strong funding drive next year would allow us to continue and deepen our investments in malaria control, and break the back of this disease.”
To address these critical funding issues, last week meeting in Dakar, Senegal, the Board of the Roll Back Malaria Partnership (RBM) agreed to a series of immediate actions to redeploy existing and new resources to address these gaps.
Share via:
Posting....