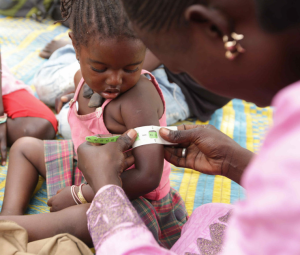 GSK announced today that the Committee for Medicinal Products for Human Use (CHMP) of the European Medicines Agency (EMA) has adopted a positive scientific opinion for its malaria candidate vaccine MosquirixTM, also known as RTS,S, in children aged 6 weeks to 17 months. Following this decision, the World Health Organization (WHO) will now formulate a policy recommendation on use of the vaccine in national immunisation programmes once approved by national regulatory authorities.

RTS,S, which was developed in partnership with the PATH Malaria Vaccine Initiative (MVI), is the first candidate vaccine for the prevention of malaria to reach this milestone. While other vaccines tackle viruses or bacteria, RTS,S has been designed to prevent malaria caused by the Plasmodium falciparum parasite, which is most prevalent in sub-Saharan Africa (SSA). In 2013, there were an estimated 584,000 deaths from malaria with around 90% of these occurring in SSA, and 83% in children under the age of five in SSA1.

The CHMP scientific opinion is a key step in the regulatory process toward making RTS,S available alongside existing tools currently recommended for malaria prevention. The positive opinion for young children was based on the review of data assessing the candidate vaccine’s safety, efficacy and quality. Clinical data submitted for CHMP assessment were mainly from a Phase III clinical trial programme involving more than 16,000 young children that was conducted by 13 African research centers in eight African countries (Burkina Faso, Gabon, Ghana, Kenya, Malawi, Mozambique, Nigeria, and Tanzania).

Data from this trial programme demonstrate that over the first 18 months following three doses of RTS,S, malaria cases were reduced by almost half in children aged 5-17 months at the time of first vaccination and by 27% in infants aged 6-12 weeks. At study end, four doses of RTS,S reduced malaria cases by 39% over four years of follow-up in children, and by 27% over three years of follow-up in infants2. In areas of the highest malaria burden more than 6,000 clinical malaria cases were prevented over the study period for every 1,000 children vaccinated2. The efficacy of RTS,S was evaluated in addition to existing malaria control measures, such as insecticide treated bed nets, which were used by approximately 80% of the children and infants in the trial.

“Today’s scientific opinion represents a further important step towards making available for young children the world’s first malaria vaccine,” said Sir Andrew Witty, CEO of GSK. “While RTS,S on its own is not the complete answer to malaria, its use alongside those interventions currently available such as bed nets and insecticides, would provide a very meaningful contribution to controlling the impact of malaria on children in those African communities that need it the most. The work doesn’t stop here and GSK remains committed to investing in R&D for malaria vaccines and treatments to find more ways to tackle this devastating disease.”

GSK has committed to a not-for-profit price for RTS,S so that, if approved, the price of RTS,S would cover the cost of manufacturing the vaccine together with a small return of around five percent that will be reinvested in research and development for second-generation malaria vaccines, or vaccines against other neglected tropical diseases.

“Today marks a significant scientific milestone for the long-standing partnership to develop a vaccine, yet several more steps remain before a malaria vaccine might reach the young children in Africa who most need protection against this deadly human parasite,” said Dr David C. Kaslow, Vice President of Product Development at PATH. “PATH will continue to work with GSK and other partners to ensure that the evidence is available, as soon as possible, to support informed decision-making on those remaining steps.”

Following the CHMP positive scientific opinion, two of the WHO’s independent advisory groups, the Strategic Advisory Group of Experts (SAGE) on Immunization and the Malaria Policy Advisory Committee (MPAC) will now jointly review the evidence base for RTS,S and make a joint policy recommendation for how it might  be used alongside other tools to prevent malaria in the event the vaccine candidate is approved by national regulatory authorities in SSA. The WHO has indicated that such a policy recommendation may be possible by end of this year.

Following the WHO policy recommendation, GSK will also submit an application to the WHO for pre-qualification of RTS,S. WHO pre-qualification involves a scientific assessment of the quality, safety and efficacy of any new  vaccine proposed for introduction in WHO Expanded Programme on Immunization. A pre-qualification decision is used by the United Nations agencies and other large scale public procurement agencies to help inform vaccine purchasing decisions.

Once a WHO pre-qualification is granted, GSK would then apply for marketing authorisation in countries in sub-Saharan Africa on a country-by-country basis. These regulatory and policy decisions would, if positive, enable countries to begin implementation of RTS,S through their universal immunisation programmes.

Both a WHO policy recommendation and WHO pre-qualification are requirements for Gavi, the Vaccine Alliance, to support eligible African countries for introducing RTS,S into local immunisation programmes supported by UNICEF.

“This vaccine is an historic achievement and a welcome addition to the arsenal of preventive tools in the fight against malaria,“ said Ray Chambers, the UN Secretary-General’s Special Envoy for Financing the Health Millennium Development Goals and For Malaria. “I thank the Bill and Melinda Gates Foundation and the PATH Malaria Vaccines Initiative for their investments made to bring the vaccine this far. And I commend GlaxoSmithKline for demonstrating resilience and ingenuity in developing this valuable asset—establishing credence in a vaccine against a parasite and opening the door for further vaccine development.”