Historic announcement of $12 billion in domestic and international, private and public funding has already been aligned to country-led five-year investment plans for women’s, children’s and adolescents’ health in four frontrunner countries. 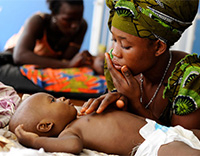 The United Nations, the World Bank Group, and the Governments of Canada, Norway and the United States joined country and global health leaders today to launch the Global Financing Facility (GFF) in support of Every Woman Every Child, and announced that $12 billion in domestic and international, private and public funding has already been aligned to country-led five-year investment plans for women’s, children’s and adolescents’ health in the four GFF front-runner countries of the Democratic Republic of the Congo, Ethiopia, Kenya and Tanzania.

Launched at the Third International Financing for Development Conference, the GFF is a key financing platform in support of the United Nations Secretary-General’s Global Strategy for Women’s, Children’s and Adolescents’ Health and the Sustainable Development Goals.

At the launch, the World Bank Group announced a new GFF partnership with its International Bank for Reconstruction and Development (IBRD) to raise funds from capital markets for countries with significant funding gaps for reproductive, maternal, newborn, child and adolescent health (RMNCAH). This ground-breaking partnership expects to mobilize between $3 to $5 dollars from the private capital markets for every $1 dollar invested into the GFF.  The Government of Canada is jumpstarting this initiative with a $40 million investment towards two focus areas: one that prioritizes strengthening front-line health systems and scaling-up of community health workers, and another that focuses on the control of malaria to reduce child mortality.

The Bill & Melinda Gates Foundation, Canada, Japan, and the United States announced new financing commitments totalling $214 million.  This is in addition to commitments previously made by Norway and Canada of $600 million and $200 million, respectively, to the World Bank Group-managed GFF Trust Fund.

The GFF has set in motion an unprecedented movement among countries, United Nations agencies and multilateral agencies including the World Bank Group, the Global Fund to Fight HIV/AIDS, Tuberculosis and Malaria, and Gavi, the Vaccine Alliance, as well as public and private sector financiers and civil society organizations, to increase and align funding in support of countries’ health priorities and plans, to drive transformative improvements in the health of women, children and adolescents everywhere. Today’s announcements are a first step to help close the $33.3 billion annual funding gap for RMNCAH.

The GFF partners also announced the next group of eight countries to benefit from the GFF, with the goal of supporting 62 high-burden low- and lower-middle income countries within five years. The GFF is adding Bangladesh, Cameroon, India, Liberia, Mozambique, Nigeria, Senegal and Uganda as the second wave of GFF countries.

A key aim of the GFF is to mobilize private sector resources that, in addition to public sector resources, help close gaps in the financing of essential interventions required to improve the health of women, children and adolescents. To this end, the GFF is partnering with the World Bank Group’s IBRD to raise funds from capital markets for countries with significant funding gaps for RMNCAH.

The IBRD finances its lending activities by issuing bonds in the capital markets, leveraging its equity to bring in private sector financing for sustainable development. The new GFF-IBRD partnership will mobilize the capital markets for better outcomes for maternal child and adolescent health, by using the overall IBRD funding platform, issuing Sustainable Development Bonds with a health focus, and designing innovative risk-sharing structures.

The Government of Canada’s $40 million investment to jumpstart this partnership and leverage funding from private capital markets will be directed toward investments in two focus areas: one that prioritizes strengthening front-line health systems and scaling-up of community health workers, and another that focuses on the control of malaria to reduce child mortality. These monies will be used as performance payments to countries, due upon the achievement of agreed-to outcomes, significantly reducing countries’ borrowing costs while incentivizing performance. Further investments in this partnership will unlock significantly more resources from the private sector, with an objective of raising up to $1 billion in private capital.

In support of Every Woman Every Child, the Bill & Melinda Gates Foundation is committing $75 million over five years to the GFF Trust Fund to advance the Global Strategy for Women’s, Children’s and Adolescents’ Health.

The GFF Trust Fund is catalyzing the work of the broader facility by providing grants to countries linked to World Bank Group loans for health and supporting countries to prepare health financing strategies that anticipate the transition of countries from low- to middle-income status. The GFF Trust Fund aims to secure universal access to essential services for every mother and every child by ensuring that official development assistance does not displace domestic resources for the sector and charting a path to sustainable domestic financing for health.

Other GFF partners are making commitments through in-country financing for country-led maternal and child health investment plans. This includes a US$50 million commitment to the GFF from the U.S. Agency for International Development. This funding will support the Democratic Republic of the Congo, Ethiopia, Kenya and Tanzania to scale up national strategies and efforts to end preventable child and maternal deaths. The Government of Japan pledges $33 million to support maternal and child health initiatives in Kenya.

In addition, Canada commits $16 million for the start-up and establishment of a global Centre of Excellence for strengthening civil registration and vital statistics, in support of the GFF’s efforts to contribute to universal registration by 2030. By improving the quality and availability of data on every birth, death, cause of death and marriage, GFF-supported countries will be able to better monitor and track their investments in maternal, newborn and child health.

GBCHealth, a coalition of companies and organizations investing their resources to make a healthier world, is committing to raise capital for the GFF from its network of companies through its Health Credit Exchange, a new performance-based funding initiative.

The GFF is a key financing platform of the United Nations Secretary-General’s Global Strategy for Women’s, Children’s and Adolescents’ Health. It is a country-driven financing partnership that brings RMNCAH stakeholders together, under national government leadership and ownership, to provide smart, scaled and sustainable financing to accelerate efforts to end preventable maternal, newborn, child and adolescent deaths by 2030.

The GFF is an essential part of the paradigm shift in development financing, emphasizing the essential but changing role of official development assistance in unlocking domestic resources and private flows and focusing on results.  It has the potential to act as a pathfinder for financing the SDGs in the post-2015 era.

“Today’s launch of the Global Financing Facility for Every Woman, Every Child, and especially the new partnership between the Global Financing Facility and the International Bank for Reconstruction and Development, is an extraordinary step forward to mobilize private capital for global health,” said Ray Chambers, UN Secretary General’s Special Envoy for Financing the Health MDGs and for Malaria. “I applaud the World Bank Group, Government of Canada and all investors in the GFF, for jump starting this initiative, and believe that it will mobilize substantial financing from the private markets.”