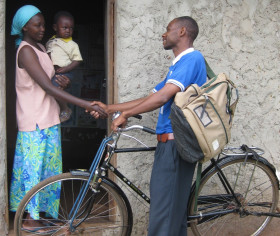 The critical role of community health workers (CHWs) was a recurring theme at the June 25th “Acting on the Call” event, which  focused on ending preventable maternal and child deaths.  The event – co-hosted by USAID, UNICEF, the Bill & Melinda Gates Foundation, and the Governments of Ethiopia and India – marked the two year anniversary of the “Child Survival Call to Action.”

Throughout the daylong event, global health and development leaders discussed  progress and challenges in the race to insure that no mother or child dies of preventable causes. USAID announced the reprogramming of $2.9B that will be used to save an additional 500,000 lives by the end of 2015, focused in 24 countries that account for 70 of the maternal and child  mortality burden.  USAID also announced more than $600M in new public/private partnerships and awards.

A strong theme that emerged during the event was the critical importance of CHWs for delivering all maternal, newborn, and child health interventions.  During his remarks, Ethiopian Minister of Health H.E. Kesetebirhan Admasu noted the central role of Ethiopia’s 38,000 Community Health Extension Workers (CHEWs) in helping the country achieve MDG 4.  Dr. Kesete mentioned that three features were essential for making the CHEW program a success:

WHO Deputy Director-General Dr. Anarfi Asamoa-Baah, during a later panel, also mentioned the importance of CHWs for achieving the MDGs, calling on donors and ministries to redouble investments in health worker programs.