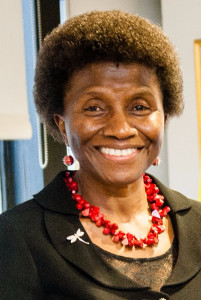 UN Special Envoy Ray Chambers extends his congratulations to Joy Phumaphi on her appointment by UN Secretary-General Ban Ki-moon to a newly-formed High-level Panel on the Global Response to Health Crises. Ms. Phumaphi currently serves as Executive Secretary of the Secretariat of the African Leaders Malaria Alliance (ALMA).

“There is no better person for such an important assignment than Joy Phumaphi,” said Mr. Chambers.  “Joy understands the on-the-ground challenges of health delivery, surveillance and measurement that will make her an invaluable presence on the panel as it considers new thinking for tackling global health threats.”

The Secretary-General has asked the Panel to make recommendations to strengthen national and international systems to prevent and manage future health crises, taking into account lessons learned from the response to the outbreak of Ebola virus disease.

Along with Ms. Phumaphi’s appointment, the Secretary-General has appointed Mr. Jakaya Mrisho Kikwete, President of the United Republic of Tanzania, as Chair; Mr. Celso Luiz Nunes Amorim of Brazil,; Ms. Micheline Calmy-Rey of Switzerland; Mr. Marty Natalegawa of Indonesi;  and Mr. Rajiv Shah of the United States of America.

In carrying out its work, the Panel will undertake a wide range of consultations, including with representatives from the affected countries and communities, the UN system, multilateral and bilateral financial institutions and regional development banks, NGOs, countries supporting the response effort, other Member States, health care providers, academic and research institutions, the private sector, and other experts.  The Panel will be supported by a Resource Group of leading experts which is to provide advice to the Panel on technical and other issues.

The Panel will hold its first meeting in early May 2015 and is expected to submit its final report to the Secretary-General at the end of December 2015. The Secretary-General will make the report available to the General Assembly, and undertake further action as appropriate.