Five years of impressive UK action and global partnerships, towards a malaria-free world 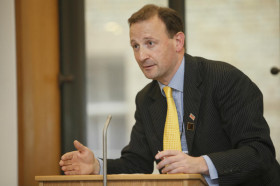 Five years ago, as the UK was establishing its pivotal leadership role in the global malaria effort, Malaria No More UK was formed. In the short timeframe since, the UK has substantially increased its malaria leadership and financial support, now second only to the US in terms of global financing to back the fight against malaria. We are expecting UK aid spending on malaria to reach a record high of up to GBP £500 million next year, in line with the Government’s 2015 malaria commitment. At the same time the percentage of the UK public who see malaria as a serious issue to be addressed has significantly increased, from 52% to 69% since 2009.

Malaria No More UK endeavours to make malaria a mainstream issue, and its tools include both traditional development media channels as well as innovative partnerships including British television’s most popular reality TV show and biggest selling newspaper. UK policy makers now know that people throughout the UK care that children can die for want of treatment costing less than £1 or nets costing less than £5. The UK’s Department for International Development (DFID) has committed to helping halve deaths from malaria in at least ten of the most severely affected countries, by 2015. To this end, in September 2013 the UK made a record funding pledge to the Global Fund to Fight AIDS, TB and Malaria.

Progress in the malaria fight cannot lead to complacency. We know how important Britain’s sustained leadership and funding is to the future trajectory of the global malaria campaign. And, as we begin the long run-up to the May 2015 UK General Election, we must confidently re-inspire leaders across the political spectrum with the important message that there is an endgame for malaria, that we can stop children dying from this preventable and curable disease and that we must accelerate efforts to eliminate malaria area by area, country by country, region by region. The next political generation could be the one to set us on course for the greatest eradication in human history.

At Malaria No More UK we leverage our resources where they can secure the greatest real-world impact. We secure major media and business partnerships to inspire the public, and we seek partnerships with all political parties to cement cross-party UK commitment to seeing this through. On the ground in Africa, we develop efforts focused on catalytic funding and innovation to increase effectiveness. For every £1 given to Malaria No More UK, we will help deliver a return on investment of over £20 for the malaria campaign.

Together with our US affiliate and key international partners we continue to encourage greater funding for the malaria campaign from other sources including countries in Europe and Asia, as well as growing economies in sub-Saharan Africa. In the coming months we will step up our work with the Roll Back Malaria Partnership, the Global Fund, DFID, The United States’ President’s Malaria Initiative, UNITAID, the Bill and Melinda Gates Foundation, the UN Special Envoy’s Office, organisations pioneering research and development and many others.

Despite our great progress across the last five years, we consider it unacceptable that in the twenty-first century one child should still be dying every minute from an entirely preventable and curable disease. We are doing our utmost to bring forward the day when no parent suffers so needlessly the loss of their beautiful child. This commitment will be relentless until we reach that extraordinary moment.