MDG success is shared success. “MDG Success Stories” shines a light on the inspiring programs that are helping us move towards achievement of MDGs 4, 5 and 6. 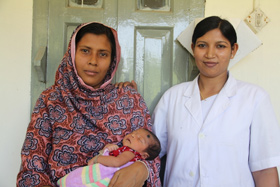 A happy mother and her baby, whose life was saved by the Helping Babies Breathe Initiative.

Save the Children’s Helping Babies Breathe (HBB) Initiative in Bangladesh focuses on strengthening newborn resuscitation in the critical first moments of life.

The Problem
In Bangladesh, 134,000 children will die before their fifth birthday. The majority of those deaths, 60%, will occur in the first month of life, with a quarter of  newborn deaths occurring  in the first few moments of life.  Among newborn in Bangladesh, 16,000 children will die due to the inability  to establish regular respiration, known as birth asphyxia. Globally, over 1 million babies die each year from birth asphyxia.

With minimal equipment and training, these deaths can be averted. This is why Save the Children is working in developing countries with the Helping Babies Breathe Initiative (HBB) to train skilled birth attendants with essential skills of newborn resuscitation. The goal is to have at least one person who is skilled in neonatal resuscitation at the birth of every baby.

The Program
Helping Babies Breathe (HBB) was developed to reduce newborn mortality by expanding high quality, affordable newborn resuscitation training materials and devices, such as bag-mask ventilators, and bulb suction. The national scale-up of HBB in Bangladesh showed that the program was effective in improving the competence of all levels of birth attendants and helped to strengthen overall health systems.

In Bangladesh, HBB Trainings were completed in more than 55 Districts by 2013. HBB conducted 1,772 Training of Trainers (ToTs) sessions and more than 21,000 skilled birth attendants (SBAs) were trained on how to artificially resuscitate newborns when faced with birth asphyxia.  Plans are in place to train an additional 10,000 SBAs, and the program is being rolled out throughout the country.

By saving lives and strengthening health systems, Save the Children and the Helping Babies Breathe Initiative are contributing to the 2.2 million children’s lives we need to save to meet Millennium Development Goal 4 by 2015.

What Success Looks Like
In northwest Bangladesh along the Indian border, deep into Joypurhat District is Pachbibi Upazila. In Goneshpur Village in the same Upazila, a story unfolds around the plight to save Ruby Begum’s newborn daughter.

The first time Ruby was pregnant, seven years earlier, she had called a traditional birth attendant (TBA) who conducted the delivery at home, and her daughter Rimu was born. In early 2012, Ruby was pregnant and planned to deliver her baby at home again.

On the morning of September 30, 2012, Ruby’s mother took her to the Pachbibi Upazila Health Complex (UHC) when she complained of a severe pain in her lower abdomen that had persisted since the night before. Fortunately for Ruby, the duty nurse Fatema Khatun identified her as being in active labour and quickly had her admitted at the UHC. The delivery took only an hour and a half, but as soon as the baby was born, Fatema noticed that the little girl was not breathing. Fatema first wrapped and dried the baby and tried to stimulate her. When there was no response, Fatema took out the little penguin sucker used in the HBB program to clean the baby’s nose and mouth and then used the bag and mask to artificially resuscitate the newborn. The first minute passed but still there was no response. Fatema kept trying for another 2-3 minutes and finally, the baby cried.

Fatema is one among 21,000 participants to receive the HBB training and newborn resuscitators intended for skilled birth attendants. Fatema shared that over ten years and nearly 2,000 deliveries, whenever a situation requiring mouth-to-mouth resuscitation failed, she had no choice but to refer the cases to higher facilities. In the majority cases, the baby did not survive. In Ruby’s case, Fatema’s HBB training and equipment made all the difference, and it saved Ruby’s daughter.

The national scale-up of this innovative initiative has been successful in Bangladesh through effective partnership efforts taken up by the Ministry of Health and Family Welfare in (MOHFW) Bangladesh in collaboration with USAID, MCHIP, Save the Children in Bangladesh, UNICEF, BSMMU, ICDDR,B and the Laerdal Foundation.