Bill Gates and Ray Chambers Call on World Leaders To Commit to Eradicating the Disease within a Generation. 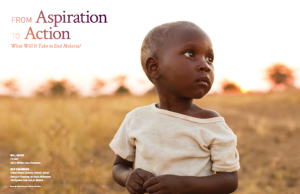 Bill Gates, Co-chair of the Bill & Melinda Gates Foundation, and Ray Chambers, the UN Secretary-General’s Special Envoy for Financing the Health Millennium Development Goals and for Malaria, today released an in-depth report on what it will take to eradicate malaria. It declares that eradication can be achieved by 2040 if world leaders commit to making it a reality, and they call on leaders to launch a global debate on the issue.

The report, titled From Aspiration to Action: What Will It Take to End Malaria?, is released as world leaders convene at the UN General Assembly in New York to adopt new goals for global development. It urges major donors and malaria-affected countries to expand their commitment to the fight against malaria, and it declares that eradication could save 11 million lives and unlock $2 trillion in economic benefits.

“Over the past 15 years, we have seen tremendous progress in reducing the burden of malaria globally – a direct result of our collective action—and we now stand in the unique position of putting an end to this disease forever,” said Ray Chambers. “The next five years are vital for setting in motion an ambitious-yet-achievable plan to eradicate malaria by 2040. We must double down on our commitment and move with deliberate haste to bring in new investments, develop new tools, and implement new regional strategies to see our unified goal of a malaria-free world become a reality.”

In recent years, global investment in malaria has jumped by 2,000% annually – from just $130 million in 2000 to $2.7 billion in 2013. These resources have fundamentally transformed the fight against the disease. Malaria deaths have fallen dramatically – saving an estimated 6.2 million lives and averting 663 million cases of the disease since 2000 – and more than half of the world’s nations are now malaria free. These gains have accounted for 20% of the total progress that the world has made in reducing maternal and child mortality under the Millennium Development Goals, and they have helped convince Asian and African leaders to commit to malaria elimination by 2040.

The challenge, according to Mr. Gates and Mr. Chambers, is that one billion people remain infected with the malaria parasite, and half of the world’s children remain vulnerable to death and disability caused by the disease. Malaria still kills about one child every minute. They argue that eradication is ultimately the only feasible solution to this challenge, and assert that the alternative to eradication – controlling the disease forever without eliminating it – is biologically and politically untenable.

“Eradication is the only sustainable solution to malaria,” said Mr. Gates. “The alternative would be endless investment in the development of new drugs and insecticides just to stay one step ahead of resistance. The world can’t afford that approach.”

From Aspiration to Action envisions a new approach to eradication that will draw important lessons from past eradication efforts and apply innovative strategies, tools and financing.

The report says that innovation is needed in three key areas:

Aspiration to Action underscores that the vision for malaria eradication by 2040 does not require a prolonged, dramatic increase in investment, in part because the risk of malaria reintroduction following elimination is very low. As a result, costly surveillance systems and routine delivery of interventions to avert disease resurgence will be unlikely.