With President Bush’s leadership, malaria deaths reduced by half. 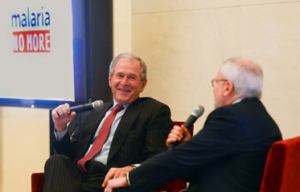 President George W. Bush was honored at a gala on April 19 in Dallas for his unprecedented commitment in the fight against malaria. President Bush was given the Global Leadership Award by Malaria No More in recognition of the pioneering role that he played in founding the President’s Malaria Initiative and supporting the Global Fund, which together have contributed to more than 4.3 million lives saved and 670 million malaria cases averted since 2000.

“I am honored to receive this award from Malaria No More tonight and I thank the American people for their generosity and leadership which has saved millions of lives and set us on the path toward achieving a world without malaria,” said President Bush in Freedom Hall of the George W. Bush Presidential Center. “I am confident that with renewed focus and determination, we can finish the job, and ensure that no child dies from a mosquito bite.”

The event also honored ExxonMobil CEO Rex Tillerson and Kimberly-Clark CEO Tom Falk for their contributions to the global malaria effort. ExxonMobil has been involved for more than a decade in the fight against malaria, through its employees and operations in Africa, committing over $120 million to the cause. Malaria No More’s partnership with Kimberly-Clark, and its Huggies diaper brand, began in Kenya last year delivering 400,000 live-saving malaria treatments and reaching millions of Kenyan mothers with health education.

Admiral Tim Ziemer, who leads the President’s Malaria Initiative and serves as the U.S. Global Malaria Coordinator, attended the gala and presented on the progress to date. Texas Congresswoman Kay Granger, who has been instrumental in preserving funding for critical U.S. foreign aid global-health programs, also spoke at the gala. As Chairwoman of the House State and Foreign Operations Appropriations Subcommittee, she emphasized the importance of continuing to effectively fund these important programs. The event, held in advance of World Malaria Day on April 25, also acknowledged the work that remains.

“President Bush was a man of action during his presidency. The initiatives he championed were groundbreaking at the time and the results today are undeniable,” said Congresswoman Kay Granger. “The President’s Malaria Initiative has been extraordinary successful. The Global Fund to fight AIDS, Tuberculosis and Malaria and the President’s Emergency Plan for AIDS Relief have changed the way the U.S. invests in worldwide challenges like malaria and other diseases that can be prevented and cured.”

The President’s Malaria Initiative, founded a decade ago under the leadership of President Bush, has distributed over 140 million mosquito nets, procured 318 million antimalarial treatments and over 174 million rapid diagnostic tests. This and other efforts have helped decrease malaria deaths by nearly 50 percent since 2000. Malaria, one of the world’s oldest, deadliest and costliest diseases, still takes the life of a child nearly every minute.

“The strides that have been made in fighting malaria would not have been possible without the leadership and vision of President Bush,” said Martin Edlund, CEO of Malaria No More. “We are thrilled to have continued that progress under President Obama and we are excited to see that people from both sides of the aisle are committed to the cause.”