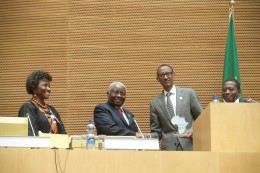 Malaria is a leading cause of child deaths and kills 627,000 people every year, most in Africa. The continent has made tremendous progress in the delivery and use of life-saving tools in the fight against malaria, including LLINs, IRS, rapid diagnostic tests, and effective treatments, including preventative care during pregnancy.

Yet malaria continues to wreak a huge toll on Africa. It burdens already fragile health systems; it is a leading cause of absenteeism in schools; it negatively impacts agricultural productivity and businesses large and small when employees and entrepreneurs are kept from their work; and it robs African countries of at least USD $12 billion every year in economic potential.

“We cannot lose ground in our struggle to end preventable deaths and suffering from malaria” said President Guebuza, who serves as Chair of ALMA. “Our people and our communities are counting on us to continue to scale proven interventions to insure that no African loses their livelihood or life to this ancient disease.”

Last month, the World Malaria Report declared that as a result of significant scaling-up of malaria control interventions, an estimated 3.1 million lives have been saved in Africa since 2000, reducing malaria mortality rates by 49%. And while funding challenges remain, resources for malaria prevention globally have grown from USD $100 million in 2000 to an estimated USD $1.9 billion in 2013. ALMA’s current Chair, H. E. President Guebuza of Mozambique, has rallied his peers and partners to increase malaria funding so that we sustain these impressive gains.

ALMA was founded by H.E. President Jakaya Kikwete of the United Republic of Tanzania to create a platform for Africa’s presidents and prime ministers to accelerate action on malaria prevention and control. ALMA’s second chair, H.E. President Ellen Sirleaf of Liberia, continued to promote performance and accountability through the innovative ALMA Scorecard for Accountability and Action. Winners of ALMA’s Awards for Excellence are selected by an independent committee representing the World Health Organization (WHO), Roll Back Malaria (RBM), the private sector, civil society and academia. For more information about ALMA and for a profile of the progress shown by the seven winning countries, please visit www.alma2015.org.