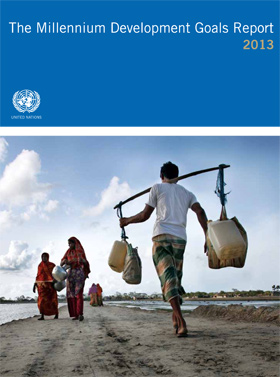 July 1, 2013, New York – Today the UN released its Millennium Development Goals Report 2013.  Ray Chambers, the UN Secretary-General’s Special Envoy for Financing the Health MDGs and for Malaria, acknowledged the progress and challenges highlighted in the report.

“With just over 900 days until the deadline to meet the goals, this report provides essential information for understanding our progress to date, highlighting both successes and challenges in our approaches,” said Mr. Chambers.  “These ambitious goals have helped to nearly halve maternal and child mortality since 1990, in conjunction with significantly reducing the impact of major killers like tuberculosis, HIV/AIDS and malaria. We have the leadership, partners, infrastructure, and vast majority of the resources to continue making progress towards the December 31, 2015 MDG deadline. The key is to maintain our commitment regardless of financial, political or other obstacles in our path.”

According to the report, which noted progress on all eight MDGs, some of the biggest gains were seen in health. With the goals in sight, the lives of 4.4 million children and 230,000 mothers need to be saved between now and the end of 2015 in order to reach the targets on child and maternal deaths, respectively. Inadequate financial resources pose a significant threat to the saving of these lives.

In March 2013, Secretary-General Ban Ki-moon appointed Mr. Chambers as his first Special Envoy for Financing the Health MDGs, while renewing his mandate on malaria, and asked him to lead the development of a business plan to accomplish these goals

The full text of the report can be found here: www.un.org/millenniumgoals.