Statement from the Special Envoy welcomes A Promise Renewed: 2015 Progress Report by UNICEF 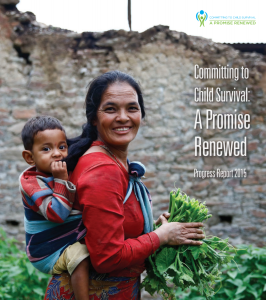 Today, UNICEF released A Promise Renewed: 2015 Progress Report, announcing that the lives of 48 million children have been saved since 2000.

Through our collective efforts, the rate of decline in under 5 mortality has more than doubled over a generation. We have made great progress in reducing child mortality around the world, even in countries with the fewest resources and against formidable obstacles. In fact, 24 of 81 low- and middle- income countries achieved Millennium Development Goal (MDG) 4, reducing the under-five mortality rate by two-thirds or more. Twenty-one sub-Saharan African countries reversed a rising mortality trend or tripled their pace of progress between 2000 and 2015, compared to the previous decade. Furthermore, since the adoption of the MDGs in 2000, the lives of 48 million children have been saved from preventable deaths.

These impressive gains are the direct result of a unified global community—governments, civil society, and the private sector, among others—who committed to prioritizing the health and prosperity of our world’s children. I extend a sincere thanks to those who put children’s lives first, and championed solutions that contributed to saving the lives of children, including low-cost high impact interventions such as immunization programs and distribution of insecticide-treated mosquito nets.

However, despite such impressive progress, these gains were not universal and this shortcoming cannot be taken lightly. Every year, 5.9 million children die from preventable causes of death such as prematurity, pneumonia, diarrhea and malaria. This is a sobering reality that must drive us to do better. We cannot standby complicit as preventable deaths continue to claim the lives of 11 children every minute.

We must recommit ourselves to the promise we made three years ago when we embarked on this movement of A Promise Renewed to end preventable child deaths. This will require us to draw on our successes over the last 15 years and leverage every opportunity to further accelerate progress. Key among these are: continued political commitment; crowding in new and innovative financing; focusing additional effort on countries experiencing conflict or crisis; scaling-up of cost effective interventions; strengthening health systems; expanding community health care workers (CHWs) to link the most vulnerable with critical services; and targeting mothers and their newborns who continue to account for the majority of under-5 deaths.

Later this month, world leaders will gather to adopt a new set of global goals for sustainable development. We must seize this moment to keep our children’s lives and well-being central to the post-2015 development agenda. A Promise Renewed has demonstrated that together we can save lives. Let us redouble our efforts to see our shared vision become a reality: a world where all children can reach their full potential.