The Unfinished MDGs and a Case for Stronger Community Health Systems

by Phyllis Heydt and Claire Qureshi

Community-based health workers (CHWs) are the healthcare backbone of the future. The MDG Health Alliance team proposes a bold strategy for developing this system of support. 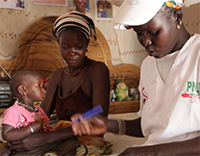 When Time magazine named Ebola Fighters as its 2014 “Person of the Year”, it was a powerful moment for those who care about community health workers (CHWs).  The global recognition resonated in equal measure with long-standing advocates for global health and health workers, and the concerned public. Could it be that Ebola has given the CHW movement its foundation for future success?

The global health and development community has long recognized the importance of community-based care.  Even before Ebola, citizens of all three highly impacted countries lived with weak health systems and inaccessibility to quality services. Mothers and children have routinely suffered or died from preventable and treatable diseases because they have limited or no access to basic aspects of modern medicine. With far too few clinics, physicians, and health workers in Liberia, Sierra Leone and Guinea, the Ebola virus gained a foothold and began its spread.

Today, as we learn critical lessons from the Ebola experience, it is clear that investment in community-based health workers will be an essential part of building better health systems that can identify and respond to future health crises.

Strengthening the needed “backbone” of CHWs across Africa will not be easy, or cheap.  In 2012, the Earth Institute, a research institute under the direction of Professor Jeffrey Sachs and housed at Columbia University, estimated that approximately 1 million community health workers were needed across Sub-Saharan Africa, at a cost of approximately $3 billion USD annually.  Major donors including the World Bank, The Global Fund to Fight AIDS, Tuberculosis, and Malaria, and GAVI, and strong CHW advocates such as Professors Paul Farmer and Jeffrey Sachs, and African leaders such as the health and foreign ministers of Ethiopia, Dr Kesete Birhan and Minister Tedros Adhanom Ghebreyesus, respectively –and the health Minister of Rwanda, Dr Agnes Binagwaho, have taken steps to catalyze investment in health workers and health systems, but the amounts raised to date only cover a small fraction of the yearly costs.

We must make 2015 the year that community health worker systems within countries become adequately planned, financed and supported. With less than a year until the close of the Millennium Development Goals (MDGs), we have a unique opportunity to focus on community health workers and to close the manpower gaps that exist.

In terms of impact on the MDGs, several countries already have ‘shovel ready’ CHW scale-up plans in place, meaning that the plans have been developed by countries, approved by ministers, and, in some cases, even been reviewed by donors.  What we need to see is donors making rapid investments in these plans. Relatedly, approximately 20 countries in sub-Saharan Africa are finalizing integrated Community Case Management (iCCM) strategies, an approach that relies on and requires investment in CHWs. While the Global Fund and other donors have committed significant funds to these iCCM plans already, each has gaps that require co-financing, especially for some key medicines and for the training, supervision, and support of CHWs.

As we look forward, it is clear that we need a bold strategy for CHW systems and support.  In addition to funding existing plans and health system rebuilding in the wake of Ebola, we need to get serious about CHWs as the healthcare delivery backbone of the future. To lead us in this pursuit, African leaders, with support from the international community, should create a path that outlines how community health can be sustainably financed and robustly integrated into strong health systems.

Since some countries will require tens of thousands of community health workers to close access gaps – at an annual cost of $1,000 to 3,000 per worker for training, supervision, and supplies – the leaders will have to grapple with significant strategic and financial challenges.  Building a bold strategy to finance and support CHWs as the ‘tip of the spear’ for health will require addressing the following issues, among others:

Private/entrepreneurial models: How can entrepreneurial models that follow an ‘Avon-like’ model – such as BRAC in Bangladesh and Living Goods in Uganda –contribute to the access and financing challenges? African leaders will need to lead a focused discussion and dialogue on the questions above, given the complexity of these challenges and the extraordinary importance of carefully articulating both the costs and benefits. The most critical output of such a dialogue should be a roadmap that addresses the challenges above and which may include a streamlined and enhanced mechanism for financing integrated CHW programs, as has been created in the past for other health ‘verticals,’ including vaccines, malaria, and HIV/AIDS.

In addition, this roadmap may include a request that lending restrictions related to investment in public sector workforce salaries (set by the IMF and other global bodies) are relaxed to incentivize governments to prioritize health workers.  Further, this roadmap should outline financing options for CHW systems at varying levels of maturity — from nascent to fully-developed — to help African ministers of finance and health understand the tools and approaches available and which, in some cases, have been used by other countries.

Leaders should also review and identify an organizational structure that allows African leaders to ensure accountability, leadership, and management around community health. Examples like the African Leaders Malaria Alliance (ALMA), might serve as a useful footprint, though will need to be tailored to the uniqueness and variability of community health.

The Ebola crisis of the last few months has proven that we have waited far too long to get serious about community health systems. Far too many have perished, and thousands of people – even in developed countries – have felt at risk from Ebola and imperiled ?by the consequences of weak health systems. The world desperately needs strong health workers to carry us across the MDG finish line and towards universal health coverage, and we should not wait another moment to give them our support.