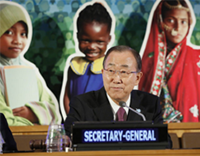 On September 26th during the United Nations Summit to adopt the post-2015 agenda, over 500 high-level representatives from governments, the United Nations, the private sector, civil society and youth, joined the Secretary-General Mr. Ban Ki-moon to launch the Global Strategy for Women’s, Children’s and Adolescents’ Health.

The Global Strategy, which envisions the end all preventable maternal, child and adolescent deaths by 2030, secured commitments totaling over $25 billion from more than 100 organizations and over 40 countries.

Ms. Amina Mohammed, the Secretary-General’s Special Adviser on Post-2015 Development Planning, provided opening remarks highlighting the success of the Every Woman Every Child movement since 2010 and the strong leadership of the Secretary-General in driving progress for women’s, children’s and adolescents’ health.  She further expressed a strong belief that we can end preventable deaths of women, children and adolescents contributing to progress across all seventeen Sustainable Development Goals (SDGs).

The Secretary-General in his remarks explained the three main objectives of the strategy, “First, survival, we want to end preventable deaths of women and children by 2030. Second, we aim to ensure every woman, child and adolescent thrives. Third, we commit to transforming the world in which women, children and adolescents live.”  His full remarks from the event can be found here.

Eleven youth delegates from around the world handed the Global Strategy to the Secretary-General, marking it’s official launch, and highlighting the focus placed on adolescents in the new document.

Following the launch, the event continued with two panel discussions featuring the Presidents of Kenya and Malawi, the Prime Ministers of Ethiopia and Norway; the First Ladies of China and Malawi; Ministers from Indonesia, South Africa, and Canada, heads of UN agencies (UNAIDS, UNICEF, UNFPA, WHO), CEO representatives from the private sector, and representatives of foundations and civil society organizations, including remarks from Ms. Melinda Gates.