Why Focus on Nutrition in the Final Year of the MDGs?

by Jessica Johnston and Madeline Cleland

A focus on nutrition can help save hundreds of thousands of children’s lives and lay a foundation for sustainable development. This article originally appeared in The Lancet Global Health Blog. 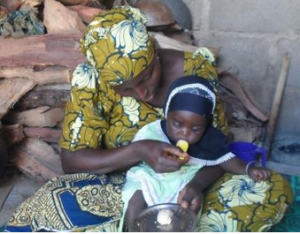 With fewer than 360 days remaining until the Millennium Development Goal (MDG) deadline, a sharper focus on the criticality of nutrition to improving childe survival is needed to accelerate progress towards the achievement of MDG4. Global child deaths have halved since 1990, but there are still 6.3 million children dying each year; achieving MDG4 requires a two-thirds reduction in the 1990 child mortality rate to below 4.3 million deaths.

Afghanistan ranks 12th in the world in terms of the annual number of child deaths, and is currently off track to achieve MDG4. Recent nutrition data show alarmingly high levels of malnutrition in the country, with some provinces reporting rates of chronic undernutrition in children to be as high as 70%. The high rates of undernutrition and slow progress in decreasing child mortality in Afghanistan point to an urgent need to better understand and integrate nutrition with maternal and child health investments in order to accelerate progress towards MDG4 achievement.

Undernourished children are more susceptible to illness and, once ill, are less able to heal. Research shows that children who suffer from severe wasting are, on average, nine times more likely to die from preventable diseases than adequately nourished children.

Women cannot, and should not, be ignored in the battle to fight child undernutrition. Undernourished pregnant women, especially adolescents, have an increased likelihood of having low birthweight babies, or infants that are small for gestational age (SGA). SGA babies born at term are three times more likely to die than babies born appropriate-for-gestational age.

The first 1000 days, from the time of conception to the first two years of a child’s life, are a critical period of vulnerability and opportunity in child health. This is the window when children have nutritional needs greater than at any other time of their lives and also the greatest vulnerability to malnutrition and infection. The 2013 Lancet Series on maternal and child nutrition found that the greatest life-saving nutrition interventions included expanding management of acute malnutrition, zinc supplementation, and the promotion of breastfeeding and complementary feeding and several nutrition interventions for pregnant women. In 2015, nutrition investments need to track closely to the list outlined in figure 1, otherwise their impact on MDG4 will be blunted.

Recent nutrition collaborations across several development actors have provided a platform for greater impact and set the stage for success. In 2013, the Nutrition for Growth Summit successfully mobilised over US$4 billion in commitments, including a $700 million commitment from the Children’s Investment Fund Foundation (CIFF) together with UBS Optimus Foundation and the UK Government. In 2014, the Canadian government committed CA$3.5 billion to maternal and child survival with an explicit focus on nutrition, and the Innovative Finance Foundation announced an innovative financing facility that will leverage a US$0.10 tax on natural resources to create a fund aimed at reducing malnutrition in Africa. Also in 2014, a Global Financing Facility for Reproductive, Maternal, Newborn and Adolescent Health (RMNCAH) was announced, with initial investment of nearly US$4 billion; however, it is still unclear what, if any, explicit focus will exist for nutrition investments.

It is critical that new funding prioritises the populations where the most deaths can be prevented. According to 2013 UNICEF data, ten countries made up 60% of the global burden of acutely malnourished children: India, Nigeria, Pakistan, Bangladesh, Indonesia, Ethiopia, the Democratic Republic of the Congo, Sudan, Egypt, and the Philippines. These are also the populations where child deaths from pneumonia and diarrhoea are concentrated, and any efforts to improve the nutritional status of children will also reduce morbidity and mortality from these leading infectious disease killers. Focusing on improving nutrition in these most vulnerable populations presents an opportunity to save hundreds of thousands of children’s lives in 2015 and beyond.

There are a number of “ready-to-implement” programme opportunities that, if funded now in the most vulnerable populations, could save hundreds of thousands of children’s lives in 2015 and greatly accelerate MDG4 achievement:

There is an opportunity to build upon a 2014 programme in northern Nigeria to integrate the delivery of nutrition with seasonal malaria prevention campaigns planned for the 2015 rainy season and save thousands of children’s lives in this year and into the future.

(2) Expansion of proven behaviour-change programming for improved nutrition, including programmes to promote early and exclusive breastfeeding, such as Alive & Thrive in Vietnam and Bangladesh. Breastfeeding is a key, high-impact intervention to prevent newborn mortality – a 2013 review of the impact of early breastfeeding initiation (within 24 h of birth) found that the risk of all-cause neonatal mortality was decreased by 44%. As countries like Nigeria and India invest in conditional cash transfer programmes to encourage more mothers to give birth in health facilities, it is imperative that the promotion of early and exclusive breastfeeding is included in the care delivered to mothers in these facilities.

(3) Expansion of Community-based Management of Acute Malnutrition (CMAM) programming to reach an additional 500,000 children in 2015.  In northern Nigeria, CIFF has partnered with UNICEF and the Government of Nigeria to improve and expand coverage of CMAM. By the end of the project, the partnership will have reached 1 million children in Nigeria and averted the deaths of an estimated 100,000 children. Expanding CMAM coverage in 2015 to reach an additional 500,000 children in Nigeria and other high-burden countries (figure 2) presents an enormous opportunity and feasible goal to save thousands of children’s lives this year.

(4) Training and equipment of community health workers (CHWs) – an untapped resource for nutrition – to educate and support mothers, diagnose and refer undernourished children, distribute health commodities (eg, oral rehydration solution, zinc) and monitor progress. While CHWs have already been shown as a feasible delivery platform for treatment of SAM in small programmes in countries like Malawi, Angola, and South Sudan, there exists an opportunity to maximise this delivery platform with other services at a larger scale for life-saving impact.

Also, in 2015 we must not miss opportunities to highlight occasions for greater collaboration with other sectors and investment in integrated programming that includes nutrition. For example, global and regional forums such as the World Economic Forum in Davos and the post-2015 Financing for Development Summit in Addis Ababa among others, present excellent opportunities to generate greater awareness about the criticality of nutrition to child survival. Such meetings can be used as “action-forcing events” for organisations to mobilise resources and strike partnership agreements that will have MDG impact and be announced on these highly visible platforms.

In the final year of the MDGs, a focus on nutrition can help save hundreds of thousands of children’s lives as well as increase the likelihood of saving additional lives post-2015. Further, the benefits of reducing malnutrition reach far beyond child survival and include significant boosts to educational attainment, lifetime earnings, and growth of countries’ gross national products. These improvements in the nutritional status of children will lay a foundation for the world of sustainable development that we are all seeking.

Refusing to let “business as usual” continue in the coming year will reinforce our collective commitment to ending child deaths from preventable causes by 2020. Anything less is unacceptable in 2015 and beyond.

Acknowledgments: Thank you to Leith Greenslade, Meghan Gilfillan and Robert Valadez for their review and input on this piece.

This is a joint post with Maddie Cleland, Associate Director of Programs for the MDG Health Alliance and Office of the UN Special Envoy for Financing the Health Millennium Development Goals and for Malaria