With One Year To Go, What The Data Say About MDG4 Progress and Gaps

by Mark Grabowsky and Katherine Rockwell

Great progress has been made in reducing child mortality around the world. However, achieving MDG4 will require a substantial, focused effort in the coming year.

With less than one year remaining to achieve the MDGs, we examined newly available data sources to assess progress towards MDG4, which calls for a two-thirds reduction in child mortality.  Based on the latest UNICEF estimates ­– published in September 2014 and covering through 2013 ­– the number of under-five deaths worldwide has declined from 12.7 million in 1990 to 6.3 million in 2013, an overall decline of 50.3%.  About half of these under-5 deaths occur in only five countries: India, Nigeria, Pakistan, the Democratic Republic of Congo (DRC), and China.

At the global level, the number of child deaths will continue to decline, which is good news.  But a further acceleration in the rate of reduction will be needed to reach MDG4. If we assume that child malaria mortality will fall to fewer than 100,000 in 2015, and then take into account the recent rates of mortality reduction across all other causes of death, we conclude that approximately 1.16 million additional children’s lives must be saved in 2015 in order to achieve MDG4. This news might sound familiar if you read last year’s headlines, and at the global aggregate level, it is quite similar to the additional one million children’s lives that our office previously estimated.

The figure below illustrates progress towards MDG4 by the highest risk countries. 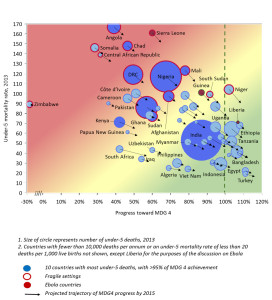 We have included all countries with more than 10,000 annual death and child mortality greater than 20/1000.  This includes all countries in Africa and the higher-mortality countries of Asia.  The horizontal axis represents cumulative progress towards the MDG4 target. The vertical axis represents the rate of progress during 2013.  The size of the bubble is proportional to the number of child deaths in 2013.  The black arrow shows the projected progress through 2015.  The countries with red circles around them are in crisis and the filled red circles are the three Ebola affected countries.  The shading in the background of the figure represents likelihood of reaching MDG4 – from green (likely), to yellow (difficult) to red (unlikely). 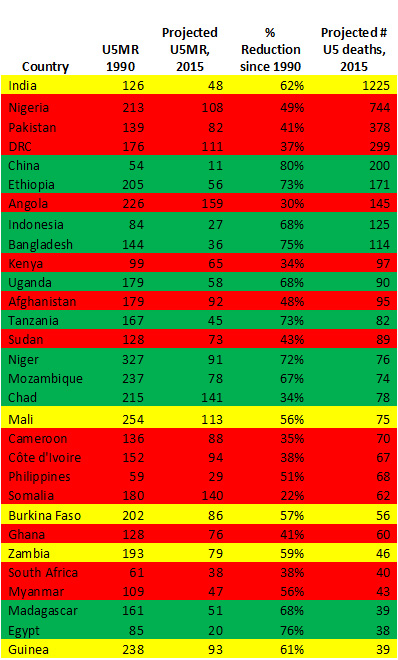 Top Causes of Death Must Remain Our Core Focus

Newborns: The number of newborn deaths is declining, but at a slower rate than under-5 deaths in the post-neonatal period.  Thus, newborn deaths comprise an ever-increasing portion of total under-5 deaths. The World Bank Group’s Global Monitoring Report calls attention to this, noting that resources devoted to reducing child mortality rates should focus on the neonatal period. In addition to the many “big switch” opportunities to save newborn lives in 2015, in the medium term underlying drivers of newborn health such as women’s education and empowerment and access to contraception were even more clearly documented as holding the power to change the trajectory of newborn survival. For example, this past year Guttmacher Institute estimated that providing a full package of sexual and reproductive health services for all sexually active women and their newborns could reduce newborn deaths by 77%- at a cost of only $25 per woman of reproductive age annually, or $7 per person in developing countries.

Pneumonia: Pneumonia accounted for approximately 15% of all under-5 deaths in 2013, and pneumonia mortality has decreased at a slower pace than other leading causes of child mortality, including malaria, measles and diarrhea. The recently published Pushing the Pace: Progress and Challenges in Fighting Childhood Pneumonia report shines a light on the uneven distribution of global progress in pneumonia mortality reductions, with the reductions driven by countries outside of sub-Saharan Africa. The funding to fight pneumonia is also uneven relative to its share of the burden: an estimated 2% of the $30.6 billion in development assistance spent in 2011 targeted pneumonia. Widespread deployment of the pneumococcal vaccine has been delayed by supply shortages and high cost which may not be resolved until 2016.

Malaria: As Ray shared in December, reducing child mortality from the 453,000 children estimated to have died of malaria in 2013 according to the latest World Malaria Report to fewer than 100,000 child deaths is within our reach.[2]  A record number of more than 200 million insecticide treated bednets were delivered in 2014, which should provide protection against malaria to over 385 million people. Additional scale up of prevention, diagnosis and treatment efforts are expected in 2015, creating a final push for the MDG target.

Ebola: WHO reports that 17% of Ebola deaths have been in children under 15 years of age.  This suggests that there have been around 700 total under five deaths due directly to Ebola in the three countries (of the total of 8,235 reported deaths).   Given the expected 2015 total of 82,000 under five deaths in three countries, the 700 Ebola deaths would represent less than 1% of these deaths.  However, the indirect effects may be substantial: Vaccination has declined or stopped, clinics have closed, health care personnel have been severely affected, and under nutrition has increased.

There are some emerging issues in the global health community that are not present in these summary data.   For example, compelling new evidence was released over the past year that underscores the impact of nutrition, sanitation, women’s empowerment, and other underlying factors in driving health outcomes and mortality. With respect to nutrition, many of the countries with high levels of under-5 mortality have poor nutrition outcomes, too, with nearly 50% of under-5 mortality indirectly attributable to under nutrition.[3] The Global Nutrition report estimated a new, remarkable return on investment in nutrition: Across these 40 countries, for every dollar investment in nutrition, a greater than 16 dollar return is seen, competitive with investments in roads, irrigation, and health more generally.[4] The latest malnutrition figures for specific countries are staggering: despite some progress in Afghanistan, the latest data suggest that reported rates of stunting in Afghanistan are still some of the highest in the world, ranging by province from 24-71%.[5]   Alarmingly, almost half of both stunting and wasting figures for children younger than 5 years in Afghanistan are severe. New research on malnutrition in India, suggests that a root cause may be poor sanitation, rather than a scarcity of food, and these underlying drivers of poor nutrition. [6]

A recent PMNCH report on MDG 4 success factors  found that 50% of progress is attributable to non-health factors, including education, fertility decline, income growth, water and sanitation, and women’s political power. The Global Gender Gap Report further underscores the importance of women’s education, income, and political power, and the magnitude of the challenge is made clear in The Lancet series on violence against women.[7] [8] Other factors, such as urbanization, will also continue to be underlying drivers of health outcomes.[8]  The linkages between health outcomes and factors outside of the health delivery system continue to be more strongly captured in evidence, suggesting that MDG 4 achievement strategies must target underlying non-health factors as well as health interventions, and do so in an integrated way.

Our projections are based upon data through mid-2013.  Our estimates include estimates of progress made during the previous 18 months and projections for the next 12 months.  We do not know the progress made during 2014 and whether we have accelerated sufficiently to stay on the projected track.  We know for sure that the amount of time available to close any remaining gap is shorter and achieving MDG4 will require substantial, focused effort.

[2] In the spirit of data convergence discussed later, 2013 malaria mortality was estimated as 440,000 by UNICEF/CHERG and 570,000 by GBD; however it should be noted that the denominators (total deaths) also vary slightly across data sources so these estimates can not be strictly compared.

[5] Afghanistan in Transition: Call for Investment in Nutrition, The Lancet.