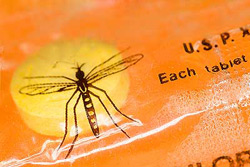 The UN Special Envoy’s Office commends the Australian Government for its recently announced commitment of $18 million to a new fund to combat malaria in the Asia-Pacific region. The Regional Malaria and Other Communicable Disease Threats Trust Fund, established by the Asian Development Bank, will support regional cooperation to tackle malaria, which is a wholly preventable and treatable disease that still causes more than 500,000 deaths worldwide every year and which is estimated to have killed more than 45,000 people in the Asia-Pacific region in 2012.

This initiative builds upon the Asia-Pacific Leaders Malaria Alliance (APLMA) which, under the joint chairmanship of the Prime Ministers of Australia and Vietnam, aims to provide the high-level leadership necessary to tackle malaria and reduce malaria cases and deaths by 75 per cent by the end of 2015, in full support of the UN Secretary General’s goal of achieving near-zero malaria deaths worldwide.

The focus of the Fund – and of Australia’s long-term malaria commitment – is to support efforts to contain the spread of drug-resistant strains of malaria, an enormous challenge in the Mekong sub-region. The potential spread of resistance beyond the region could unwind the significant progress made to date in reducing malaria illness and deaths, costing billions of dollars. The Fund also supports innovative programs to assist malaria-affected countries in the Asia-Pacific region to achieve their national malaria reduction targets. In addition to Australia’s commitment, the trust fund will leverage financing from other countries in the region, as well as those of the private sector and other donors.

“Our progress towards ending deaths from malaria relies on visionary leadership like that of Australia,” said Ray Chambers, the UN Secretary General’s Special Envoy for Financing the Health MDGs and for Malaria. “I am so pleased that the Australian Government is at the front of the regional fight against malaria, and I know that the Asia Pacific Leaders Malaria Alliance (APLMA) is more likely to achieve its goals with Australia’s leadership behind it.”